Using Media to Publicise Your Research

Hosted by Loughborough University’s Graduate School, “Using Media to Publicise Your Research” was a one-day training event for researchers and academics to help familiarise them with interactions with the media. Both of the speakers were ex-BBC journalists with a wealth of experience in dealing with academics.

The first exercise entailed describing my research to an imaginary class of 12-year-olds, a surprisingly difficult task for researchers who spend the majority of their time discussing their work with their peers.

The speakers gave some insight into being a journalist in order to help us academics work with them. They opened with “The first rule of journalism: First simplify, then exaggerate”. Academics are often found guilty of making things too complicated and trying to cover too many aspects of their work. Keeping the content to a minimum with only one or two take home messages is a must when dealing with media. Other tips included replacing nouns with verbs in headlines or titles, what makes a good news story and what journalists find difficult to work with.

Following this, the speakers staged and scenario to demonstrate how to take control of an interview. This was particularly useful for parrying difficult or awkward questions and answering questions with the answers you have planned to provide.

The second half of the session involved a 3-minute interview that was videoed to review later. I was given my first question, as this is often the case in an interview. With that in mind, I had to organise some background material and prepare for the interview. Each participant had their interview recorded and we all gave feedback on the videos at the end. A few things became clear, maintain eye contact with your interviewer, resist from moving or fidgeting and definitely do not look into the camera. After reviewing the feedback, we all had the opportunity to do another 3-minute interview, this time with different questions.

This event served as a basis for some of the skills needed to communicate my research to a wider audience. The common pitfalls are fairly obvious once they are explained but acting on them in another task entirely. Having completed this course, I would feel much more comfortable talking to media or a wider, non-academic audience about my research. However, the way to really improve and develop confidence is through practise.

The event was aimed at PhD students carrying out research in the following areas:

Ruben has commented "Open prototyping can be very powerful in gathering insights and understandings. This workshop by FutureEverything, who describe open prototyping as developing and testing a concept or process through input from external contributors, was focussed amongst others on identifying the people you want to gather information from. Whether they are end-users, stakeholders or the audience of your research output should determine the way you approach and involve them. By defining how to reach your audience and why you would use certain communication channels, you start reformulating your research into a more concise, understandable manner.

All in all, it was an interesting workshop that was attended by PhD students from a variety of backgrounds. It was a pleasure to meet these people from CDTs in Nottingham, Lancaster, Newcastle and Bath." 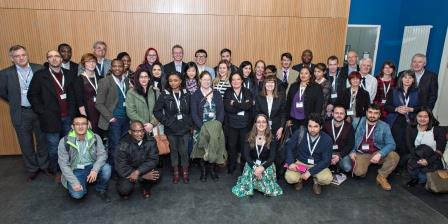 The conference aimed to bring together researchers, managers and policy makers from academia, industry, government, commerce and the third sector. To follow on from the 2014 conference, ‘Making connections’, the overarching theme of this conference was ‘Exploring our digital shadow’.

The first day focussed on early career researchers, with a programme including a selection of workshops designed to hone skills in information management research. The second day comprised a series of invited and contributed papers and posters with a broad appeal across the sector. There were excellent networking opportunities throughout both days.

Melanie Zimmer, Cohort 2 student, was one of the CDT-EI students who attended the conference and had this to say;

"Even though the "International Data and Information Management Conference" was not directly targeted to my PhD topic, I - as a PhD student half way through my first year - gained a lot from attending it. During the first day of the conference I attended speakers would talk about "The digital transformation of defence operations in the 21st century", but also share their opinions on "8 ways to develop your research". Two workshop sessions were offered in each of which one out of four workshops could be chosen.  Especially "Writing journal and conference papers" and "Reflections on the 'how'. Reconsidering research methods in Information Systems", in which skillful researchers would share their experiences, were really helpful for me.  Also of interest was the "5 minutes madness" session I which other PhD students had to present their research within 5 minutes. Although the conference was aimed at a broad audience, I felt it perfectly focused on PhD students and early career researchers."

With thanks to IDIMC for the photograph.

The proceedings of the conference can be downloaded here.

The two days CDT HighWire writing retreat in Wyresdale Park Scorton provides a good environment to think and write. Normally an efficient writing requires a peaceful and calm place, and this retreat was structured and scheduled in such a way that researchers could have a better outcome of it. This is achieved in two ways:

We attended this writing session in order to work on our group project report. We felt the schedule of the writing retreat would be useful during writing-intensive periods, especially if you can team up with some other PhD students and have breaks together! This turned out to be one of the goals of the program; finding others that are willing to work according to a schedule and have breaks together. Therefore, it would be good to have some other students from our department at a writing retreat session. Furthermore, we believe that working on a group project in a structured way can be beneficial as well. The structured sessions allow group-members to keep each-other up to date on their progress.

Besides the writing sessions the retreat gave us the chance to meet some PhD student from another CDT programme. It was interesting to talk about their PhD topics and learn from their experiences. But most of all it is cool to meet people from various backgrounds and universities.

Last but not least, the location, food and hospitality in general was amazing. And Tish was amazing in sorting this out for us! We would recommend this writing retreat to any CDT student!

For more information about Highwire CDT based at Lancaster University or the Digital Economy CDT Network please click the links.

On the 11th of November 2015, HSSMI Ltd hosted their first Leadership Forum at The ArcelorMittal Orbit in Stratford (London). The High Speed Sustainable Manufacturing Institute (HSSMI) Ltd is a research institute closely working together with industrial companies and leading academic institutions to support manufacturing in the UK.

The subject ‘Manufacturing, the next five years; technology, knowledge building and political support; what is needed? How it is best delivered?’ was discussed on a panel with the following keynote speakers: Margaret Wood MBE ‐ Chairman, ICW (UK) Ltd; Professor Robert Allison ‐ Vice Chancellor and President, Loughborough University; Brian Holliday ‐ Managing Director, Siemens Digital Factory; Peter Domeney - ‎Manufacturing Engineering Director, Jaguar Land Rover. One of the main themes of the discussion involved the need of strengthening the manufacturing in the UK by making engineering more appealing to young people.

As part of the agenda, PhD students sponsored by HSSMI Ltd prepared posters outlining their PhD research. This was a great opportunity for networking and to communicate the research and also get valuable input from industry by representing HSSMI Ltd as well as the CDT-EI. 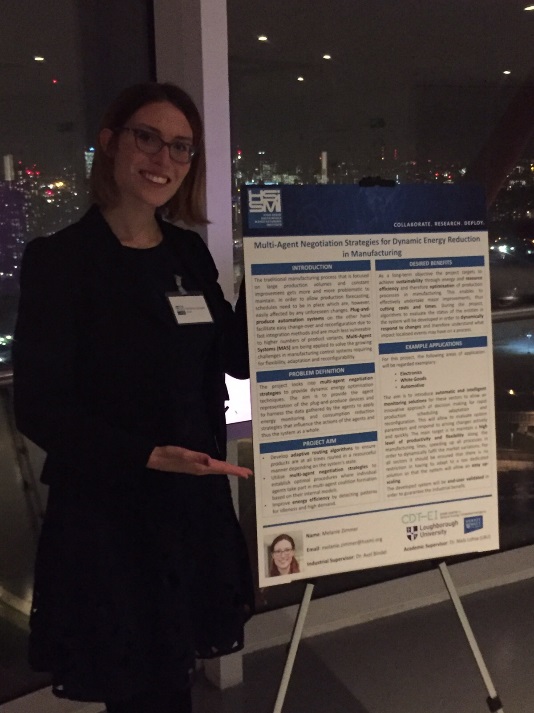 Loughborough University has been awarded £3.9 million to develop a totally new way of designing and fabricating high frequency communications circuitry.

The funding from the Engineering and Physical Sciences Research Council (EPSRC) will be used to establish the SYMETA – SYnthesizing 3D METAmaterials for RF, microwave and THz applications – research programme.

The SYMETA team will be led by Professor Yiannis Vardaxoglou from Loughborough University. The other research partners include the Universities of Exeter, Oxford, Sheffield and Queen Mary, University of London. Speaking about the consortium, Professor Vardaxoglou said: “Introducing these novel structures into the complex world of electronic design will offer a radical new way of designing and manufacturing electronics at low cost. We are grateful to EPSRC for supporting such an innovative and timely project.”

SYMETA’s research has the potential for significant academic, economic, societal and environmental impacts.  With rapid advancements in the development of metamaterials the possibilities for innovative applications across many sectors are significant.  Industries that could benefit from the research include aviation, space, healthcare and the military.  Employing the advanced manufacturing techniques that the consortium will develop will also remove the need for the harsh chemicals typically used in the manufacture of traditional circuit boards, thereby offering significant environmental benefits.

The months of September and October see the start of the new academic years at Heriot–Watt University and Loughborough University and students in our second cohort have now started their PhD journeys.

Their journey kicked off earlier in September by attending our induction programme in Scotland. The weather was overcast but dry with rays of sunshine emerging for our field trip to a local castle. This did not matter though as most of the week was spent preparing for the coming four years by getting to know themselves better and each other. Members of cohort 1 joined the newbies to share their experiences of a year with CDT-EI and it made them realise how much they have achieved in just one year. 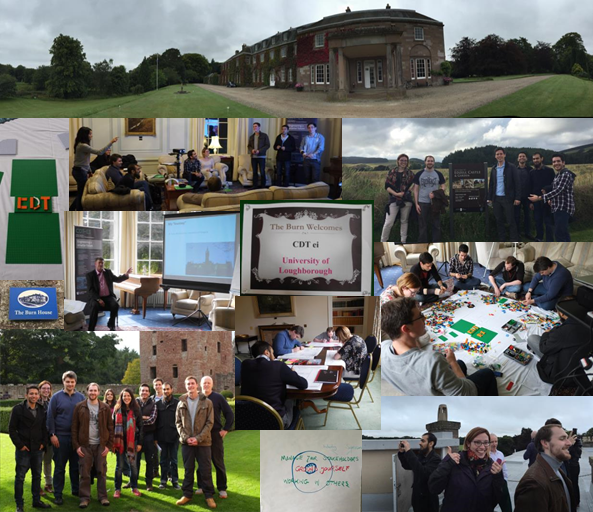 The 2015 Research to Industry Conference

On 3rd September the CDT-EI attended The R2i Electronics Conference at the University of Sheffield. Following the success of the previous editions in 2012 and 2013 the conference provided the opportunity for the electronics manufacturing industry, research and development companies and institutional research centres to meet, review and discuss the best of the UK’s academic electronic research projects.The event was oraganised by the KTN and IMAPS UK.

The overall aim was to bridge the gap between industry and research and the conference was split into four sessions, Government support for collaborative research in industry, industrial fellowships, Spin-outs and Centres for Doctoral Training. Our new co-Director, Dr Keith Brown, gave an overview of the EPSRC CDT model and explained our innovative training programme. Following Keith’s presentation one of our 2nd year students, Ian Park, described his experience of the CDT programme and explained the aims of his PhD project, which is co-sponsored by Taylor Hobson Ltd. 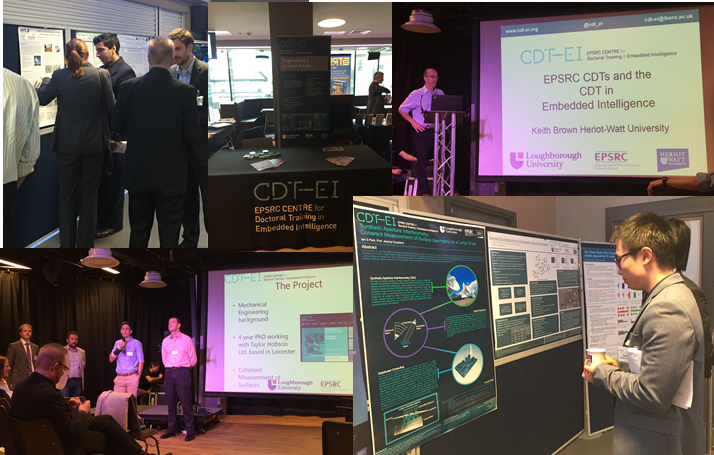