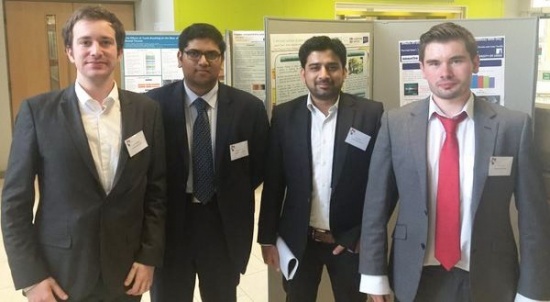 The conference opened with Professor Margaret Stack, who is the head of the tribology research group at the University of Strathclyde. She gave an overview of the applications and projects related to the Tribo-Corrosion field, specifically projects related to Tidal Turbines.

Arturo Martinez-Insua-Rodriguez and Jamal Umer presented posters during both days of the event, outlining their PhD projects. Rickie Bewsher showed a presentation of his project on the first day, while Ehsan Fatourehichi, Theofilos Gkinis and Rob Turnbull showed their presentation during the second day of the event.

The group found the shorter ‘snap’ presentations was an interesting concept; it allowed the presenter to show a very quick overview of the project and findings in an understandable manner. The possibility of participating in these snap presentations for future conferences is being considered.

Interesting work on the rail industry was shown by students and a keynote speaker Professor Roger Lewis from the University of Sheffield. The projects involved investigating the surface of railway lines and how different conditions give way to different tribological aspects. Professor Roger Lewis discussed finding global feasible methods in removing contaminants on railway lines.

Many other PhD students representing different Universities asked questions to the CDT-EI group to get a better understanding of both Embedded Intelligent and the individual projects. Many members were interested in the process of how the Dynamic Group validated their findings. During the evening meal we were introduced to members of the IT-CDT group and got a further insight to Tribo-Corrosion.

The second day keynote speaker was Professor Daniele Dini. He showed examples of how tribology was a highly inter-disciplinary subject and the vast applications it covers. He explained the tools developed and how final results have given a greater understanding to tribology. Many people were interested in the contact analysis of his work and the laboratory testing and simulations he presented.

The conference was concluded by Professor Duncan Dowson, who gave a speech on how successful the TriboUK conference has been. He is proud at the commitment and the work going into Tribology. He further explained that tribology is one of the most interdisciplinary subject and great care and effort should be put into it. He presented the final awards and prizes, unfortunately the group did not win anything this year but they are committed in succeeding in future conferences.

1 week Paul Luckermann, one of the @cdt_ei PhD students, has been working with @PingTourEurope and has been instrumental i… https://t.co/CQLeeU6t4r
2 weeks ago Very proud of our PhD student Paul Luckermann, whose research with @PingTour, has contributed to technical advances… https://t.co/MhC6D8dqGY
2 weeks ago How time flies. It feels like yesterday when we first met you ! And look at you know... a Dr ! 🥰👏🏆