On the 1st July, I participated in the Connected and Autonomous Vehicles (CAV) Hackathon hosted by Transport Systems Catapult (TSC). The event was held at their Milton Keynes office where each team had the opportunity to tackle one of the five challenges. These included: exploring CAV data, CAV ecosystem business models, build a LUTZ simulation, environmental impact and accessible CAV design. We had 26 hours to work on the challenges before presenting at to a panel of judges and the other competitors. 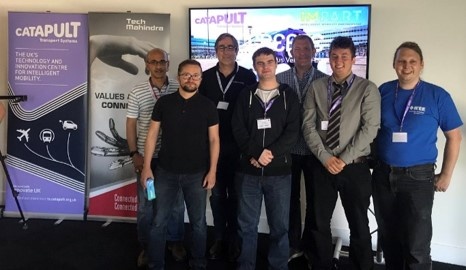 Team ROSteK consisted of myself, Dr Thomas Steffen (my supervisor), Mauricio Silva (University of Northampton) and Ashton Bowen (De Montfort University). We decided to tackle the challenge of building a CAV simulation. TSC provided us with data, equipment (including a driving simulator and an Omnideck virtual reality simulator), and expert mentors in the field of autonomous vehicles and simulation. We recognised that a key challenge to testing autonomous vehicles is latency of feedback of the controller during simulation. For this reason, we wanted to find a way of putting the actual controller of the autonomous vehicle within the simulation, rather than modelling it. We achieved this by creating an MQTT broker to bridge the virtual world in Unity (windows-based gaming engine) and the controller in Linux-based Robotic Operating System (ROS). This allowed us to test the quality of a controller, similar to how you would test an engine on a test bed before putting it in a vehicle in the automotive industry.

Our business pitch to the judges was that through high performance computing you could exponentially increase the amount of testing prior to putting the autonomous vehicle on the road. Each group had 4 minutes to present their ideas which was then judged on novelty, technical complexity, business model and quality of presentation. Our efforts of working continuously through the night were rewarded by being declared the winners of the weekend. We were given Amazon Echo Dot’s as a prize and the top 3 groups were put through to present our ideas at the showcase finale at the London Transport Museum on the 12th July.

We had just over a week to further develop our ideas and put together a 10-minute presentation on as a business pitch. At the showcase finale, there was a drinks reception within the museum; which allowed for networking opportunity with people from academia, government and industry, and a vast range of disciplines. Around 100 people were in attendance, which included a different expert panel of judges and guest speakers. At the end of the presenting the judges were given the opportunity to ask questions which focused on the business, social and ethical issues of the projects. The winners were presented with a £2000 prize and the opportunity to present their work to the industry sponsors. Team ROSteK finished as runners up.

Despite not winning the showcase finale, it was a fantastic opportunity to learn about advances in the field of autonomous vehicles. The most significant thing I learnt was how important it is to tailor the information we delivered to our audiences. Depending on their background their agendas would vastly differ and so you had a to have an extensive knowledge to be able to answer the range of questions and explain why your work is both relevant and applicable. This is something I plan on doing with my own PhD work when preparing for presenting, communicating with my sponsor company and networking.