Each year, we bring all of our CDT students together to participate in our annual Summer School, which provides an opportunity for all the student cohorts to meet, work together and to learn new skills. At the request of the cohorts, this year the students took part in an ‘embedded intelligence related’ challenge. The students were set the task of developing an ‘embedded intelligence’ aid for the visually impaired, in partnership with Royal National Institute for Blind People (RNIB) college Loughborough. The overriding theme of social responsibility and entrepreneurship was apparent in the teams wishing to capitalise on their own research, knowledge and experience to make a real difference in people’s lives. 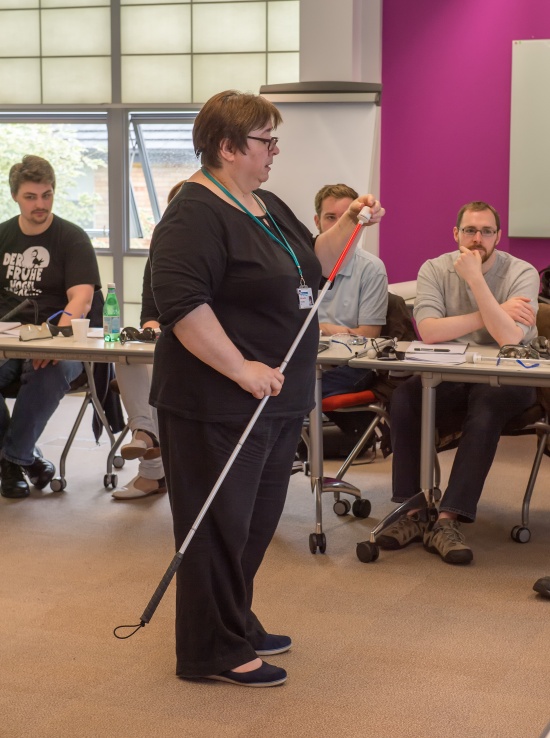 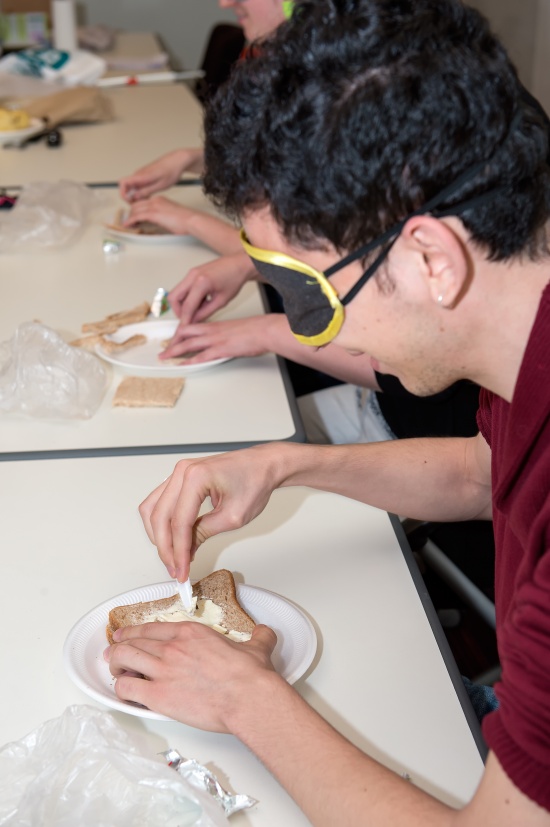 The event was kicked off with a thought-provoking presentation by Anna Janickyj of RNIB College, who introduced the challenges those with visual impairments face daily. The students were able to understand these challenges on a personal level with the use of specialist goggles and tablet apps designed for the able-sighted to see directly through the eyes of the visually impaired. The students then took part in a series of light-hearted challenges involving blindfolds and everyday tasks, such as making a sandwich and peeling a potato, in order to really get a feel of the challenges blind people face on an every-day basis.

Much of the next two days were devoted to the three teams brainstorming potential ideas and turning these into physically and commercially viable solutions. Students could choose from a range of hardware, including sensors, arduinos, magnetometers and current basic models of canes, as well as software available from Wolfson School.

Since all students have diverse academic backgrounds, which manifests equally diverse research programmes, this allowed each team to be able to capitalise on a mélange of skills. At the same time, it was an experience which required students to expand their comfort zone, and gave many the opportunity to learn about topics or subjects beyond their conventional realm of study. 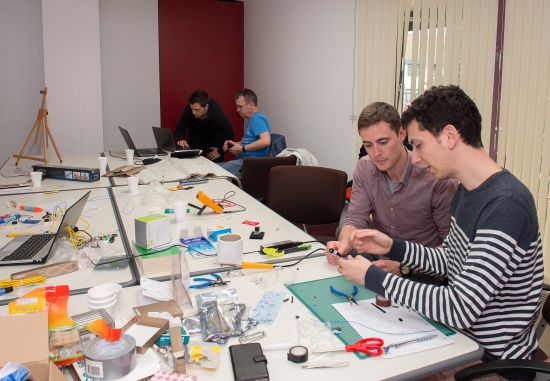 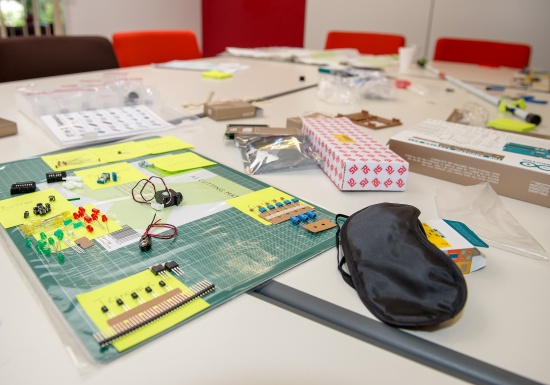 After a day spent in teams planning and designing prototypes, we welcomed two local organisations to the Summer School, offering fresh thought and inspiration, and the chance for teams to refine their prototypes.

George Torrens, Senior Lecturer from Loughborough University’s award winning Design School, presented to the students on ‘Empathy and Sympathy: a User-centred Design approach to New Product Development’. Using examples from his own experience and his background in Assistive Technology, George spoke about the importance of using empathy and affinity to optimise the design process of new products, a ubiquitous theme in this year’s challenge. He identified the challenges associated with Assistive Technology, including social discrimination and the perceptions of disabilities, and suggested ways in which we could overcome these through user-centred product design. 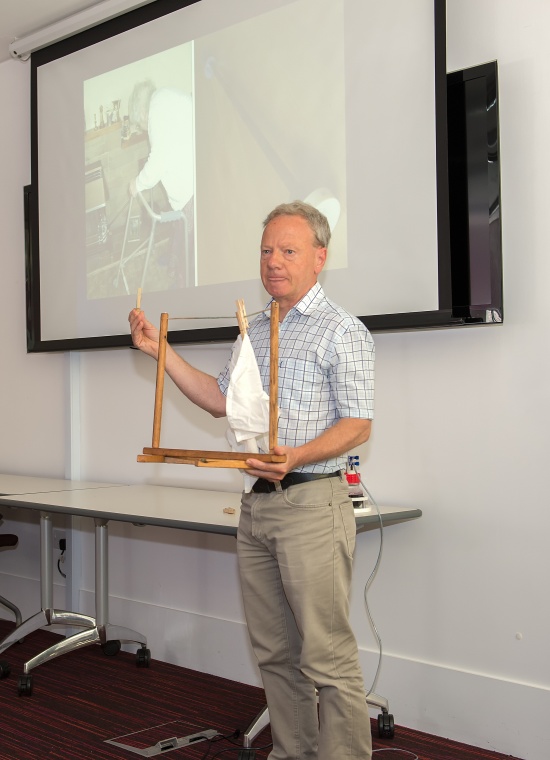 Next to present were Martin Grant and Brian Golland from REMAP, a national charitable organisation custom-making equipment to help disabled people lead more independent lives. Supporting the idea that a little sensitive thought could add the most creative solutions, Brian and Martin demonstrated numerous examples of equipment they have adapted, and the positive effects these have had on the lives of the users. In many cases, REMAP take commercially available products and adapt these on an individual basis, often by making the simplest of amendments, allowing gained independence and enjoyment. Find out more about national volunteering opportunities here.

On the final day of the Summer School, the three teams presented their final prototypes to a panel, consisting of Prof Martin Goosey, Chair of CDT-EI Advisory Board, Chair of ICT and VP of Technology for EIPC, Lynda Parker, Head of Mobility at RNIB College Loughborough, as well as current RNIB college students Lauren and Kieran. Teams had ten minutes to showcase what they had achieved over the past two days, and since the judging panel included potential users of the prototypes, this meant that one of the most important factors being judge on was the added independence and functionality the prototypes offered to the end user. 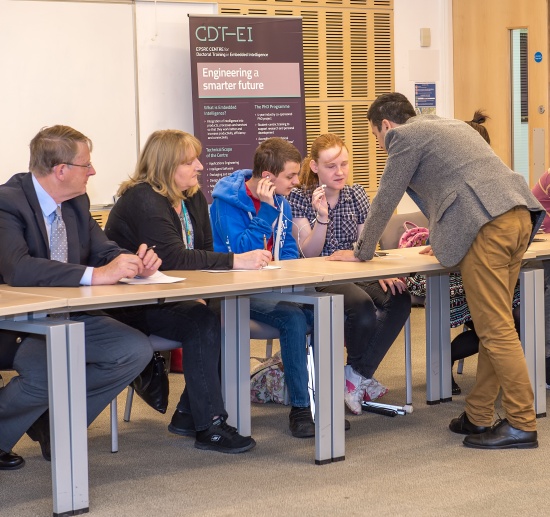 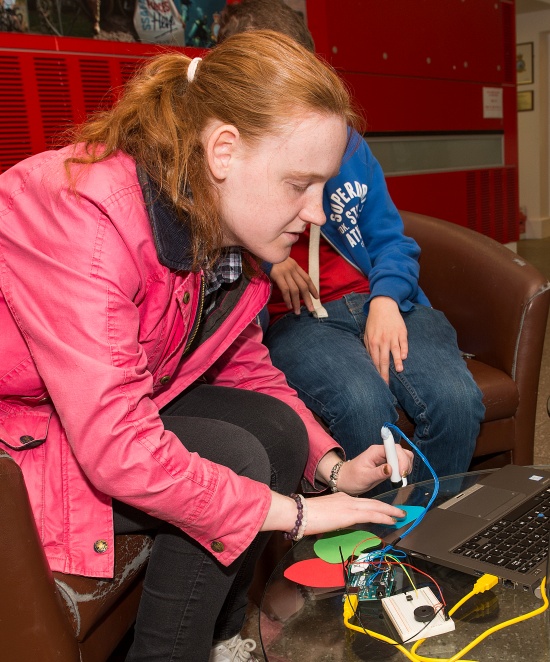 After great consideration and questioning the prototyping, the panel concluded that the team behind the face recognition app had the most user-centered design and would allow a real gain in independence. Despite this, all teams were praised for their sensitive approach to the project, with Lauren and Kieran in particular enjoying putting the final prototypes to the test themselves. 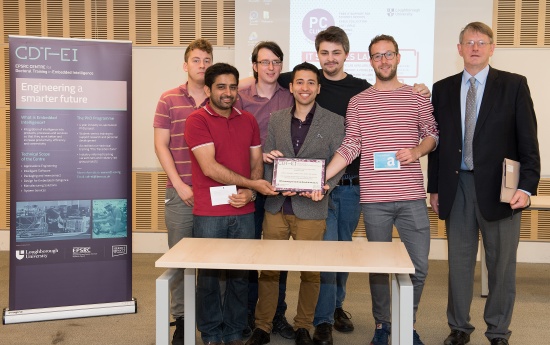 Brian Golland from REMAP Leicestershire, commented: “We were most impressed by the interest shown by the students to our organisation and the work we do. It was very interesting to hear their comments at the end of the presentation and during the discussions we had in their workshops. All the projects they were undertaking were clearly very useful and had the potential of being made as a practical device.”

“For me, Anna from RNIB was the best inspiration for the project. She gave us an insight into the daily difficulties a blind person faces. This was very important, as we take many things we do every day for granted. This was the main source for the design choices we made, within the constraints of the available equipment”, Tobias Reichold from the winning team.

Lynda Parker, Head of Mobility at RNIB College Loughborough, commented: “Events such as CDT-EI Summer School are a good thing to have for all concerned. The ideas that students came up with to help people with sight loss were very good.”

CDT-EI wish to thank all of our Guest Speakers for their participation and inspiration for our annual Summer School, and now aim for the prototypes designed by our students over the course of the event to have future application in the Assistive Technology market.

1 week RT @carmentorres: Last 24h to access free our paper on the rapid assessment of mechanical properties of polymeric foams using a non-destruc…
1 month RT @carmentorres: Dr Joe Holt, alumnus of my lab @lborouniversity and @CDT_EI is now Development Engineer @CoventiveComp. Congratulations t…
5 months ago RT @carmentorres: We had a group of SMEs visiting @WolfsonSchool to find out more about our research in Manufacturing #composites #embedded…