To learn more about agents and Industry 4.0 in practice, I attended the “2nd International Summer School on Intelligent Agents in Automation” (http://www.issiaa2016.ipb.pt/) held at Linköping University (Sweden) from 9-17th of June 2016. An agent is “an autonomous component, that represents physical or logical objects in the system, capable to act in order to achieve its goals, and being able to interact with other agents, when it doesn’t possess knowledge and skills to reach alone its objectives” (Paulo Leitão). The theme of this Summer School was “The 4th Industrial Revolution and the Industrial Internet of Things”, which was aimed at PhD students to discuss intelligent production system based on their cyber-physical formulation.

An introduction to the programming language Java and the software framework JADE (Java Agent Development) was followed by the two main courses - Starting and advanced track, the former being the one I attended.

Amongst others, we had guest speakers from Festo and SAP as well as the Technical University of Munich and the Austrian Institute of Technology. The talks would vary from industrial agents to model-driven engineering to the Internet of Things; of interest to me were also the introduction to ontologies and the role of human operators in Industry 4.0.

Each day would start with a theoretical session and would be followed by practical exercises in the afternoon. On the last two days we worked in teams on the demonstrator shown in the picture below. Each team would implement a different part of the model (conveyor belt, gripper, product, etc.) and deploy agents on a PC and Raspberry Pi. Unfortunately, time was a bit short to finish this exercise.

The course was a good starting point for an introduction to agents and getting to know the people in this field, but it depends on the schedule next year if I will attend again. 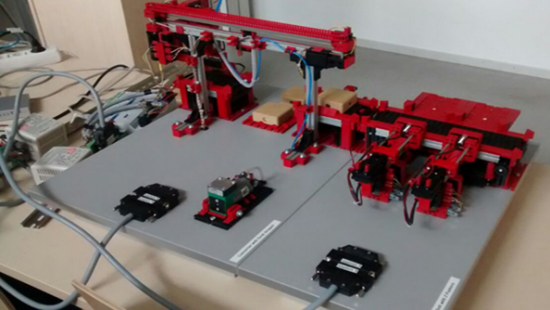